Getting the Most Out of Larkwire: Advanced Listening Skills

A Process of Discovery

Sooner or later, every student of birdsong runs into some sounds that seem impossible to learn. No matter how much you listen to them, you struggle to tell them apart or there's so much variability that you can't get a handle on them.

This is completely normal! Some birdsong comparisons are difficult and that's why Larkwire includes explanatory tips from Michael O'Brien. A world class master at birding by ear, he has created precise explanations for each group of confusable sounds. If it's possible to tell these sounds apart, he'll tell you how he does it.

To be sure, some sounds are not distinguishable (e.g., calls of Yellow-bellied, Red-naped, and Red-breasted sapsuckers) or are not always distinguishable (e.g., Oak and Juniper titmice) and this should be clear from Michael's text. But in this article, we'll focus on sounds that can be learned but which may be elusive at first.

The key to mastering these difficult bird sounds efficiently is knowing how to use the explanatory notes. Sometimes the help the notes give is obvious and immediate. For instance, Chipping Sparrow is usually long and Dark-eyed Junco is usually short, and as soon as you read that, you know what to listen for. 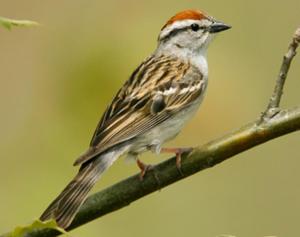 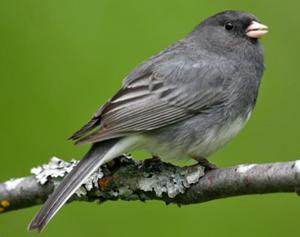 But more often, you will need to go through a process of discovery using the text as a guide. This article shows you how to do that. Let me emphasize that I'm writing this not as a birdsong expert (that's Michael's job) but as the software designer, cognitive psychologist, and chief guinea pig.

For this example, we'll look at four warblers: Yellow Warbler, Yellow-rumped Warbler, Wilson's Warbler, and Nashville Warbler. (Even if you don't have these particular warblers in your songpack, the same principles will apply to any group.)

Let's look at the text, starting with Yellow Warbler:

Here are all the Yellow Warbler cuts:

When I first read this, I was puzzled. Sweet, clear whistles? They didn't sound like that to me. I wondered if maybe Michael's hearing was simply different than mine and these songs sounded different to him? 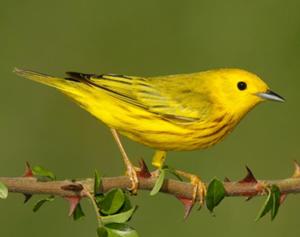 So I opened up the Comparison page for this group, where I can listen to all the Yellow Warbler samples together. The most common patterns are given first, so that's the place to start. When I heard the AK cut, a sweet, clear, whistled quality jumped out at me. Aha! Maybe that's what he's talking about. They don't all sound that distinct, but now when I'm listening to these samples, I have a specific idea of what to listen for. Indeed, as I became more familiar with these songs, I started to hear that same quality in the others, even when it is less obvious.

TIP #1: Try to find just one sample that matches the described quality.

Next, the notes say that there's a typical pattern to these songs: introductory notes, followed by a quick stutter phrase and then a final rising or descending note. I hadn't noticed that! The only problem was, I didn't know what a stutter phrase was. In fact, I wasn't even entirely sure what a descending note was.

As before, I listened to all the samples to try to find one that would give me a really clear example of a stutter phrase right before the last note. The NF cut helped a lot.

By now I had a pretty good idea of what that final note sounded like—it's a quick pitch slur. But by listening across all seven samples, I could hear that there's quite a range of variability for this final note. Sometimes it's really strong and obvious and other times quite subtle or missing entirely (which is why the notes say "typically").

TIP #3: Listen to all the samples and make sure you understand the entire text. It is through this process of careful, focused listening that your listening skills will become more like an expert's.

I remember reading this and thinking it seemed vague. A rapid series of notes? Lots of warblers sound like that to me! And usually with chattering quality but sometimes more whistled? Well, how does that help? 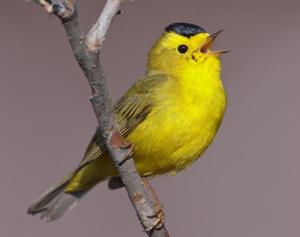 The way to use this text is to start with the most common pattern (or patterns). For Wilson's Warbler, it's this: A rapid, chattering series of notes. The description is simple because it's a simple song. See if you can find the best example—I like the OR cut. Then use this core pattern as a reference point for understanding the variations. The ON cut is definitely a bit more whistled (you'll hear this best with good headphones) and it has that little trill at the end. But as long as you have the basic pattern in mind, you can recognize it.

Of course, Larkwire is structured so that you learn these most common patterns first, and only later are additional variations introduced. But you won't fully understand the text unless you realize that this is what's going on.

Now on to Nashville's Warbler:

This one's a little tricky (and we may change it in a future edition) because the text focuses on comparisons and only gives the core pattern in the mnemonic. Remember to study the mnemonic! Once you realize that Nashville typically starts with two-syllabled notes and then changes to a distinct second part, you've got it.

When I first read the text, I wasn't sure what was meant by two-parted (yes, it means "having two parts"). For terms that may be unfamiliar, or used in an unfamiliar way, we have a Glossary. 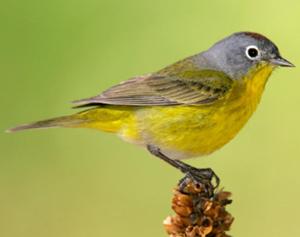 This is worth pointing out because even though the text is written in English, many terms, such as sweet, sharp, emphatic, etc., are used in ways that may be new to you. The Glossary contains numerous audio examples so that you can listen to the quality that's being referred to.

The rest of the Nashville Warbler text addresses the possible confusion between Nashville's and Wilson's, along with information about distinguishing eastern and western populations of Nashville's. Most of the time you're going to use the common patterns to tell these songs apart, but when a particular cut doesn't fit the pattern, then dig into these finer details.

TIP #6: Use the supplementary info to study particular samples.

Finally, let's put this all together by studying the Yellow-rumped Warbler text. When I was first learning these, this one gave me fits. The samples seemed all over the place and I couldn't figure out the pattern. (Note that I was working with all nine cuts, not just the three most common ones.)

A steady-paced, slurred warble; usually fades at end but some with stronger ending. More slurred, less emphatic than Nashville or Wilson's.

In hindsight, it's very simple, and it's all right there in the text. The basic pattern is a steady-paced, slurred warble that fades at the end. The first four cuts exemplify it. 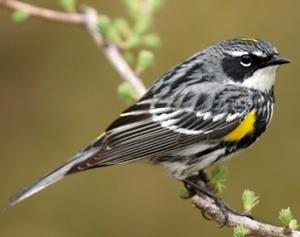 But that still leaves five cuts of variations! The NH cut is easy—it's just like the pattern, only more whistled. And NY just lacks the faded ending. The remaining three are more confusing. They're not steady, and they don't fade at the end. Interesting!

TIP #7: Use the common pattern as a reference point for understanding the variations.
TIP #8: Find your own way. The text is the starting point for your own discoveries.

To sum up, Michael O'Brien's text gives you a powerful entry point for your own process of discovery. It's almost like having a master birder to go birding with. But you'll still need to go through your own learning process, developing the accuracy and subtlety of your listening skills.

For reference, here are all the tips together:

TIP #1: Try to find just one sample that matches the described quality.
TIP #2: The mnemonic phrases aren't just memory aids. They often provide important clues to song structure.
TIP #3: Listen to all the samples and make sure you understand the entire text. It is through this process of careful, focused listening that your listening skills will become more like an expert's.
TIP #4: Learn the most common patterns first.
TIP #5: Use the Glossary.
TIP #6: Use the supplementary info to study particular samples.
TIP #7: Use the common pattern as a reference point for understanding the variations.
TIP #8: Find your own way. The text is the starting point for your own discoveries.

Your feedback on the text is always welcome. Are there items you feel are missing from the Glossary? Is there part of the text that's unclear or confusing? Let us know by sending email to support@larkwire.com.